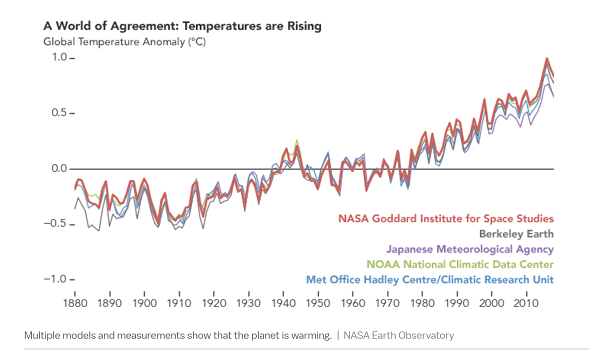 In 2018, 2.6 million pounds of carbon dioxide were pumped into the Earth’s atmosphere every second.  As a result of human beings’ impact on the climate, the Earth had its fourth-hottest year on record, according to NASA, NOAA, and several other international organizations measuring global temperatures.  You should be alarmed.

We have less than 12 years to act

In October of 2018, the Intergovernmental Panel on Climate Change stated that humans have 12 years, until 2030, to slash global carbon emissions by 45 percent in order to avoid a 1.5 degrees Celsius increase in global temperatures above pre-industrial levels.  At 1.5 degrees, the number and magnitude of catastrophic climate-related events will be at levels unseen by humans.  We’re currently 1 degree above pre-industrial levels and we’re on a trajectory to hit 3 degrees above by the end of the century.

We INCREASED emissions in 2018

That’s right, not only are we not anywhere close to reducing emissions by the required 45 percent, America actually increased its carbon dioxide emissions by 3.4 percent in 2018, which was the largest increase in eight years, according to the Rhodium Group, a global research firm that measures annual emissions.

Emissions had been dropping since 2005, but 2018 was a reversal of trends for a few reasons.  The industrial sector increased its overall emissions by 5.7 percent.  While emissions from passenger cars has continued to decrease due to fuel efficiency regulations, emissions for the trucking and flying industries increased by over 3 percent last year.  Even the electricity grid produced 1.9 percent more emissions, because more electricity was generated last year from dirty sources like natural gas.

Climate change-related events cost the US $91 Billion in 2018

Heat waves, hurricanes, and wildfires killed thousands of Americans and did immeasurable damage to the ecosystems within the affected areas.  But one thing that can be measured is the amount of money that was spent to clean up after these disasters, and 2018 was the fourth most expensive year on record when it comes to money spent on climate-related disasters, according to NOAA.  There were 14 events that each carried price tags of more than a billion dollars.

We’re getting dangerously close to the edge

There’s no way of sugar coating this – the world is getting worse every year and the rate of degradation is increasing.  And despite the evidence, politicians and corporations aren’t stepping up to do anything about it.  The biggest polluters continue to lobby against regulations, and it’s working.  The Trump Administration’s Environmental Protection Agency and the Department of the Interior are rolling back regulations designed to mitigate climate change at an alarming rate.

Who will step up?

Corporations won’t change their ways until politicians force them with regulations and consumers stop buying from polluters.  Politicians won’t force corporations to change their ways unless their constituents demand it.  If you expect to live past 2030, then you better start demanding change.  Only an educated and engaged population will be able to take on the greatest threat humanity has ever seen.  We’re doing what we can to help educate and engage – now it’s up to you.