On Wednesday, Croatia upset England in a tense 2-1 World Cup match. The game featured dramatic twists and turns, extra time and even a surprise ending – what a match!

At MeterGenius, we’re making our own World Cup. And since this is an energy blog and not a sports site, we’re checking out both countries to determine who has the smartest approach to energy efficiency. Early this week, we assessed France vs. Belgium. Check it out.

Below, we asked the same five questions to England and Croatia to see how these two competitors compare. Ready for the match? Let the crowd roar!

Who has the greatest percentage of electricity generated from renewable resources?

Croatia starts off the #SmartEnergyWorldCup by flipping the script on the actual World Cup and striking first! The Croatians come in at 68.50 percent electricity generated by renewable resources. As for the UK? It’s a big drop-off for the British with only 27.40 percent electricity generated by renewable resources, according to the EIA. Croatia’s cool approach to smart energy includes a commitment to advancing solar power. Here’s a recent article that talked about some pretty exciting new developments in solar.

Who ranks better on the Environmental Performance Index?

Let’s see who can strike with the second goal. The Environmental Performance Index is a comprehensive evaluation of a country’s approach to getting green. Here are two main categories for EPI: Environmental Health “which measures threats to human health” and Ecosystem Vitality “which measures natural resources and ecosystem services.” According to EPI, “These objectives reflect the dominant policy domains within which policymakers and their constituents generally deal with environmental problems.”

Which country produces more CO2 emissions per $1 of GDP?

Which country is more efficient when it comes to Energy Intensity?

Last round! For this category we look to Energy Intensity, which is defined by the U.S. Department of Energy as “measured by the quantity of energy required per unit output or activity, so that using less energy to produce a product reduces the intensity.”

So who has the edge: England or Croatia?

The U.S. Energy Information Administration reports Croatia with 82.43 million Btu (British thermal unit) per person. On the other hand, England is at 124.43 million Btu. It’s a no-doubter – Croatia gets the final nod with a goal on Energy Intensity.

Croatia advances yet again by a one goal margin. But will they win #SmartEnergyWorldCup Final against France? Stay tuned for updates later this week! 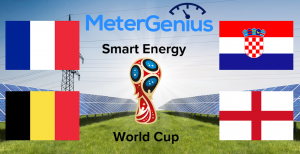 France vs. Belgium: Which Country Wins the #SmartEnergy World Cup?

One Response to England vs. Croatia: Which Country Wins a Head-to-Head Match-Up in the #SmartEnergy World Cup?