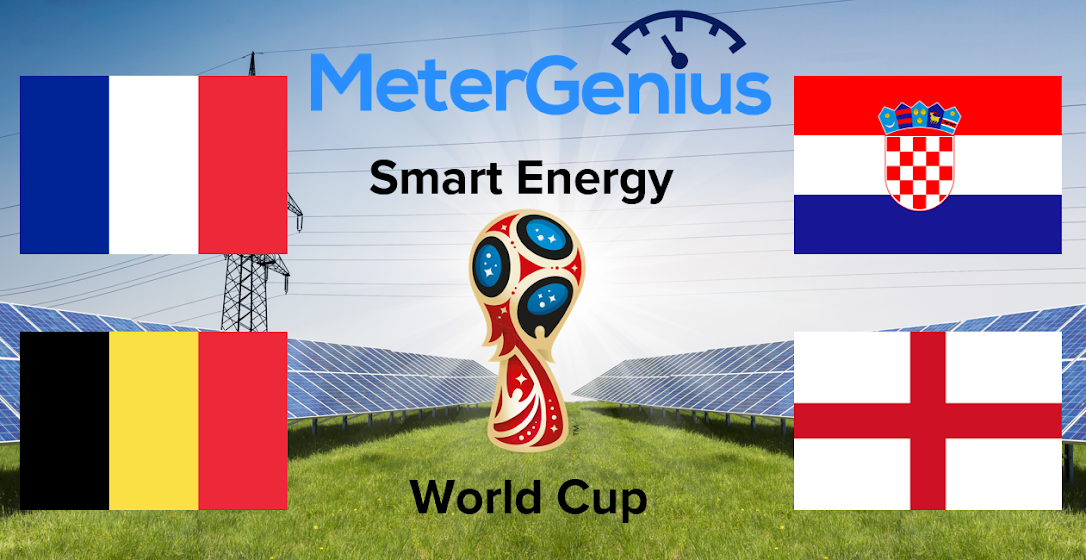 The 2018 World Cup is finally in the books! On Sunday, France celebrated a 4-2 victory over Croatia – 20 years after the country took home its first World Cup. At MeterGenius, we’ve been celebrating our own World Cup by determining which countries have the smartest approach to energy efficiency. Here were the results of the semifinal matchups:

Now, we turn our attention to the final matchup between Croatia and France. Below, we asked the same five questions to these team to see how they fared when going head-to-head in the #SmartEnergyWorldCupFinal. Ready for the match? Let the crowd roar!

Who has the greatest percentage of electricity generated from renewable resources?

The Cinderella story and almost champions of the World Cup, Croatia starts off this World Cup with an impressive 68.50 percent electricity generated by renewable resources. France can’t compete. Just 16.8 percent of France’s energy is generated by renewable resources, according to the EIA. As we mentioned last week, Croatia’s cool approach to smart energy includes a commitment to advancing solar power. Here’s a recent article that talked about new developments. It’s a new game. Croatia strikes first!

Who ranks better on the Environmental Performance Index?

What is the The Environmental Performance Index (EPI)? It’s one of the most comprehensive evaluations of every country’s approach to being environmentally-friendly. EPI includes two main categories : Environmental Health “which measures threats to human health” and Ecosystem Vitality “which measures natural resources and ecosystem services.” According to EPI, “These objectives reflect the dominant policy domains within which policymakers and their constituents generally deal with environmental problems.”

France not only beats Croatia on this one – they almost beat the entire world.  The French scored 83.95/100 in the 2018 EPI results, which ranked 2nd in the world! Croatia came quite a bit below France’s silver medal showing with a 65.45/100 score that ranked 41st in the world. France strikes back!

Which country produces more CO2 emissions per $1 of GDP?

Who’s got the cleaner credentials for the third goal? This one is close. According to World Bank, France emits 0.11 kg of carbon dioxide per every $1 of GDP. Croatia lags behind with .18 kg of CO2 per every $1 of GDP. France takes control with this clean shot on the goal!

Which country is more efficient when it comes to Energy Intensity?

This is it – last round in the #SmartEnergyWorldCupFinal! It all comes down to Energy Intensity, which is defined by the U.S. Department of Energy as “measured by the quantity of energy required per unit output or activity, so that using less energy to produce a product reduces the intensity.”

So who has the edge: France or Croatia? Who’s going to strike for the final goal and all the glory?

The U.S. Energy Information Administration reports Croatia with 82.43 million Btu (British thermal unit) per person. On the other hand, France is at 154.03 million Btu. It’s a no-doubter – Croatia flips the script on the real game with the final goal on Energy Intensity.

That’s all, folks! We crown a new champion for the #SmartEnergyWorldCup! Thanks for playing along!

England vs. Croatia: Which Country Wins a Head-to-Head Match-Up in the #SmartEnergy World Cup?

France vs. Belgium: Which Country Wins the #SmartEnergy World Cup?

England vs. Croatia: Which Country Wins a Head-to-Head Match-Up in the #SmartEnergy World Cup?
What You Can Do Right Now to Slash Your Air Conditioning Costs